Nana Aba recounts how a scammer made her raise $9,000 for surgery with a fake medical report

Crowdfunding has become a source of relief for several families in Ghana thanks to Twitter. Regardless,some unscrupulous people have used the opportunity to scam others to raise money for them.

A lot of families with relatives who need expensive surgeries have resorted to the micro-blogging app to raise funds to support their loved ones.

Celebrities also join in helping raise the funds sometimes. One of those personalities that have helped many people is Ghanaian media personality Nana Aba Anamoah.

However, the General Manager of GH One TV has fallen prey to scammers who deceived her with a fake medical report into raising funds for a surgery which turned out to be false.

According to the journalist, she was able to raise $9,000 from her friends out of the $13,000 required for the surgery only to be told by the hospital that they have no records of any patient like that.

In a series of tweets on her Twitter handle, Nana Aba chided people who take advantage of others to make money in the name of raising funds for just courses.

She wrote: “I’m so upset, disappointed and angry. It’s not nice to take advantage of people. Why would you bring me a fake medical report. I spend my entire week raising funds for you only to be told by the hospital that they don’t have any record of you. Why would you do that to me?

“It’s not fair at all. You don’t treat human beings this way. I haven’t done anything to warrant such dishonesty. It’s not cool. I’m sad. I’m really really sad.

“Thank God I never gave the cash out to you. May God forgive you.

“I don’t like being taken advantage of. If you’re broke be honest and say it. Don’t tell me you need $13k for surgery and get me to disturb my good friends to pay. Imagine if I had handed over the $9k to this moron? You people shouldn’t do that okay? It’s not nice.”

See her tweets below: 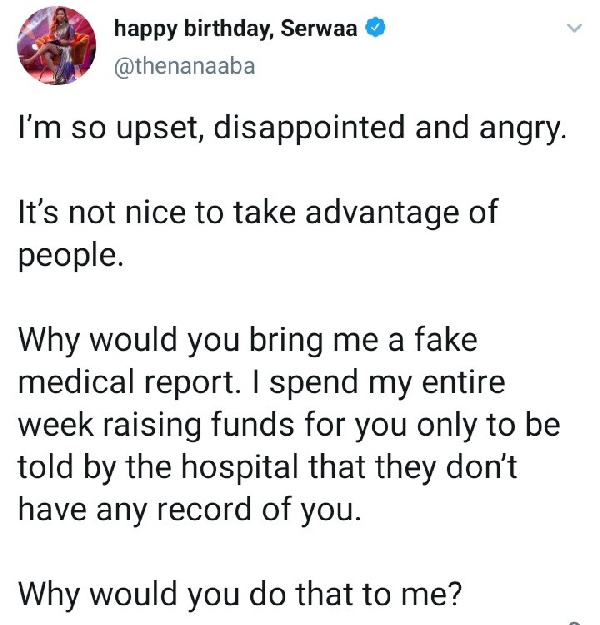 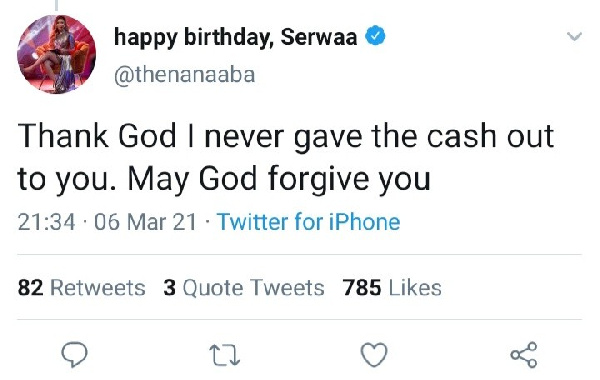 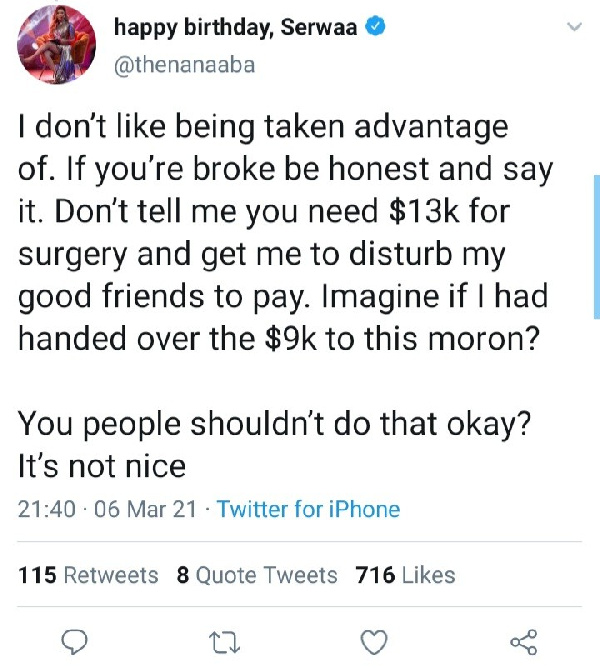 He was a sobolo seller, we didn’t even respect him – Guy who knew Camidoh…

Sometimes you just have to quit – Kuami Eugene to underground artistes

Ghanaians react as Shatta Wale shows the face of his new…